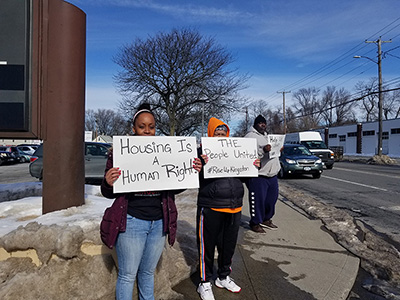 This 12 min film will be a conversation framer/starter around what equitable development looks like in Kingston. The goal is to shift culture, moving hearts and minds in the region around the issues of housing affordability and access, and establish housing as a human right. X is a point of intersection, a crossroads. We are at a crossroads in Kingston where we can decide whether or not we believe that everyone deserves a safe place to live, and that our priorities need to reflect that decision that we make. Set in Kingston, NY, this film will uncomplicate the issues of gentrification, giving our viewers an understanding of the types of decisions our city, county, and state governments make every day that prioritize developers over people. It will explain how these forces that often promise revitalization and market growth also promise displacement and trauma for low-income communities and communities of color. This film will humanize the issues of displacement on both ends of the spectrum, putting a face and a story to those who are displaced and create a moral responsibility for those in power to choose differently. We will also show the types of decisions we want the places we love to be making instead.

Callie Jayne’s desire to fight for justice began in 8th Grade protesting against unequitable dress code policies. Callie’s career started off in sales, bouncing from job-to-job, and struggling to make ends meet. When she decided to go back to college, she found herself transitioning to the post-secondary education field – wanting to focus on helping women prioritize their education, and moving forward in their careers. It was then, that she found herself in a situation like so many before her – a single mother, trying to survive within structures that were created to make sure she failed. Callie finished her undergraduate degree in business, and then went on to complete her Masters’ in Nonprofit Management. For her internship, she began working at a human services organization, which later hired her full time. She built and expanded the volunteer base and pantry hours which increased the number of families who were able to access food. She increased the individual giving, community and business engagement which lowered operational costs. Though providing emergency services was helping hundreds of families every week, it was doing nothing to change the systems of oppression that are set in place. Her life, work and educational experiences led her to discover the institutionalized issues that were preventing her and many others — from all walks of life — from achieving a quality standard of living. Her desire for change comes from the belief that all people deserve a basic standard of living, and if we could all come together and hear many differing perspectives, we can use our struggles to achieve collective greatness. —

Shadia is the Executive Producer and Founder of the Survival Media Agency and is a film director and photographer. She became an advocate for justice and the environment at an early age. At seven she got involved in a campaign to address the cancer cluster in her community that was caused by toxic waste. Though young, she spearheaded a successful eight-year campaign to pass state legislation to refinance the Superfund Program in New York State. She is a recipient of the Yoshiyama Award and the Brower Youth Award and has been featured in the 2007 Green Issue of Vanity Fair and is a recipient of Elle Magazine’s 2008 Green Awards. Shadia worked for the Environmental Justice & Climate Change Initiative as the youngest Campaign Coordinator in the Energy Action Coalition. Her photos have been featured in the New Yorker, the Boston Globe, MSNBC, and the front page of the Huffington Post among many others. She has mobilized photo and video teams all over the world to produce visual media tools that equip social movements. Since 2016, Shadia has helped produce 53 short films.