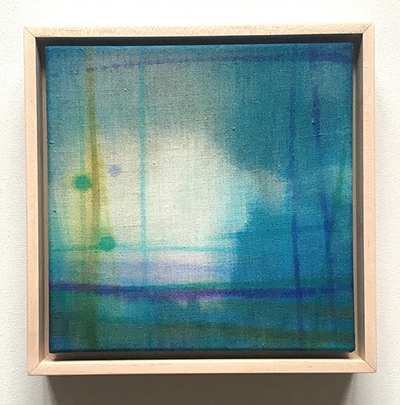 X is the intersection of mediums, attempting to create an intersection of people and encourage further conversation, connection. The collection, a collaborative effort between visual artist Eva Magill-Oliver and recording artists Matt Pond and Chris Hansen, comprises twelve paintings and twelve instrumental compositions across twelve keys. The artists have responded to each other’s work over time and across wireless miles in the languages they speak most fluently, adding to the collection as a reaction to what they’ve seen and heard from each other. In its completed state, An Orchestrated Impulse is intended to be interactively experienced in a way that allows the observer to choose what he sees and hears most intensely.

Eva Magill-Oliver is an artist currently living and working in Atlanta, Georgia. She creates delicate, meditative collages, drawings and paintings that reflect and explore different elements of the natural world. Her main subject matter is drawn from abstractions and patterns found in nature and organic environments. She feels a strong sense of connection to the constantly evolving and transitioning state of the natural world that surrounds her. Her mediums of choice are pencil, ink and cut paper on paper. The variance in materials adds a textural interest that she uses to mimic those found in the environment. The collage aspect also adds an element of controlled design as a fresh transformation emerges with every new layer. After two decades of successfully pursuing simple truths in popular music,

Matt Pond has recently begun to take on projects that stretch beyond the conventional trajectory of independent rock and roll. He currently resides in Kingston, New York, and pays strict attention to the arc of every season.

Chris Hansen began his career as a manager and engineer at the legendary Bearsville Studios, near Woodstock, New York. He continues a long collaboration with Matt as guitarist and co-producer of numerous Matt Pond PA albums and EPs. They co-wrote the score to the film Lebanon, PA and have composed commercials for IBM and Penguin Books.