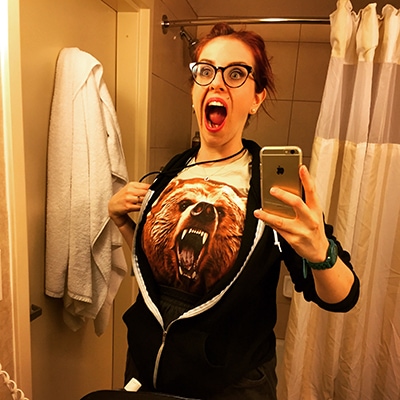 Meg will be presenting 10 short pieces of non illusory personal storytelling performed in a random order chosen by the audience. Throughout the piece, X factors will be randomly added that change the rules of performance and challenge the performer creating an unknown and experimental outcome.   Non illusory theater contains no fourth wall and no pretense. The actions on stage are really happening. The stories are true. The moment of performance is the setting. The pieces consist of monologue, dance, games, and engagement with the audience that tackles current issues through the lens of comedy and personal honesty.  My work is feminist and intersectional, it does not rely on XX chromosomes to define the feminine. It simply relies on one that all humans share.

Meg is a writer, performer, and producer. She is an ensemble member at-large with the New York Neo-Futurists, known for their popular weekly show The Infinite Wrench. She has toured productions of the New York Neo-Futurists’ previous late night show Too Much Light Makes The Baby Go Blind to the Edinburgh Fringe Festival, The Providence Improv Festival and headlined the Out of Bounds Comedy Festival in Austin. After 10 active years with the New York Company, She moved to an at large position to focus more on writing and solo work. She plays the role of “Deb” and “Proverb Lady” on the hit podcast Welcome to Night Vale. She is the Emcee and Tour Manager of the Welcome to Night Vale live show and has brought the live show to 17 countries and almost all of the 50 States. Meg is the producer and co-host of the comedy podcast “Good Morning Night Vale”. She is based in Los Angles and the Hudson River Valley.