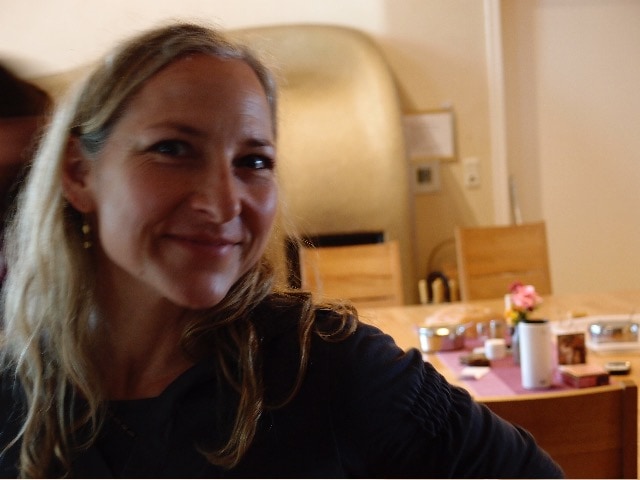 Dance pathed Sarah Sudhā’s path to the Healing Arts and to NYC where she was certified as a Laban Movement Analyst, an ISMETA Somatic Movement Therapist (RMT) and became inspired to move to the Hudson Valley to follow her bliss. The Hudson Valley brought her closer to Nature, taught her about community and it was where she found her Grandmother’s Grandmother’s farm on Sawkill Rd. After a short return to her Southern birthplace, Sarah began traveling to Santa Fe NM to study Bodywork & Hatha Yoga, moved there in 1998, was licensed as a Massage Therapist (LMT), worked in Santa Fe’s top spas & eventually was hired to create Spas from scratch for several boutique hotel properties there. Team building, designing treatments, customizing products and training therapists was where Sarah Sudhā found her professional stride while Hatha Yoga was fueling her personally, studying for over 11 years with Rodney Yee, Richard Rosen and Richard & Mary Freeman. In 2009, directly after completing the flagship Urban Zen Integrative Therapist training with Yee in NYC, Sudhā spent 9 years traveling and teaching in India and Europe under the tutelage of Mata Amritanandamayi Devi. Most recently, she has been deepening her body wisdom practices through Trauma Recovery Work. She returned to the Mid Hudson Valley during Covid to re-connect with people, stand again on her Great Great Grandmother’s Land, root herself and offer her skills through Trauma Informed Embodiment practices.