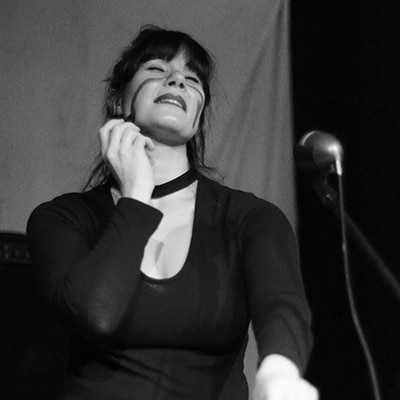 Glockabelle shreds two Casio VL-Tones, a lyre-shaped glockenspiel with eight thimbles and sings in both French and English while racing against her drum machine, Monsieur Dix. Her wild sound stems from a combination of inspiration and circumstance. Born to Francophone parents, Glockabelle received an education both stateside and in France. After being introduced to the sound of the Casio VL-Tone by a neighbor in Paris, Glockabelle began blending her classical piano techniques with vintage synth-pop sounds resulting in a hyperactive mixture of rhythm and tone. She also developed a unique approach to playing the glockenspiel: not with mallets but with eight sewing thimbles.

This new sound lead Glockabelle to a U.S. tour as a member of the Fiery Furnaces. She has performed at The Toronto Film Festival, Bonnaroo, Miami Art Basel, SXSW, The Montreux Jazz Festival, and WFMU. She has opened for Lightning Bolt, Marnie Stern, James Chance and the Contortions, Kaki King, and The Go! Team. She released her first EP in May 2015, which was hailed by SPIN as “Anarchic Enchantment.”

Her journey and performance at SXSW 2017 were filmed as part of a documentary by the NHK Network of Japan which premiered in April 2017.

In April 2018, she completed a solo tour of the northeastern U.S. opening for Lightning Bolt and is currently completing a new album to be released later this year.