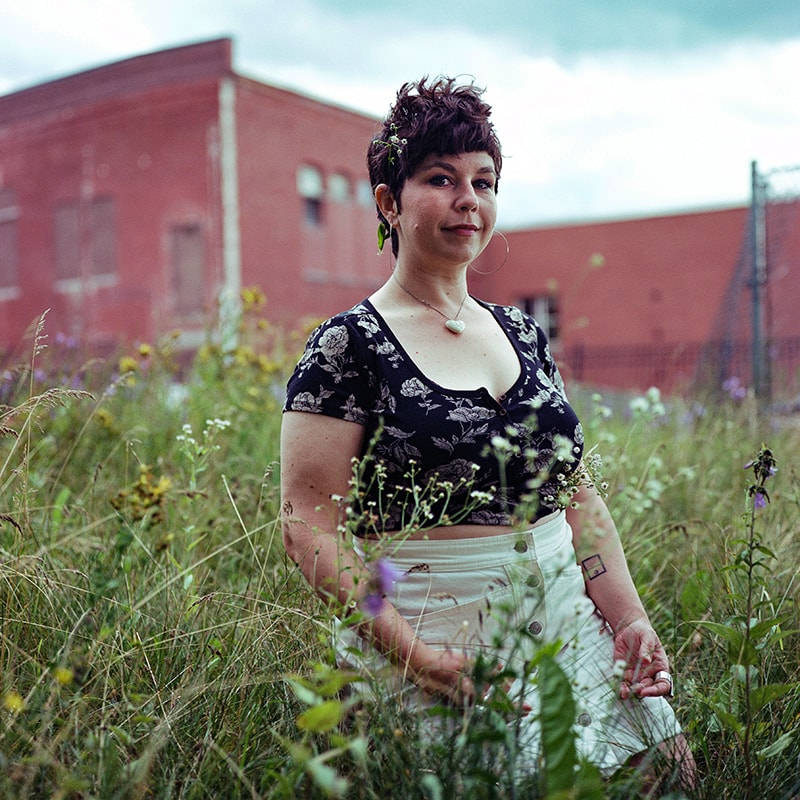 Jocelyn Mackenzie is a Brooklyn-based musician, maker, and psychic medium. A synesthete since childhood, her spiritual awakening in the summer of 2019 opened the doorway to her communication with those in unseen realms. She uses her finely tuned empathic and intuitive senses to offer intimate readings, connecting her clients with departed loved ones, bolstering their inner intuitions, and offering them guidance on their personal and creative paths. Her clairaudient skills have informed her songwriting for decades – also an accomplished musician, she recently released her debut record PUSH on Ani DiFranco’s record label Righteous Babe. At her core, Mackenzie’s extra-sensory skills inform her creative expressions, integrating media and meaning to create work that is both sensual and personal.

With a shape-shifting sound that is at once personal and universal, Jocelyn Mackenzie creates intimate pop songs for a generation of seekers. She is a Brooklyn-based musician, maker, and psychic medium, best known as the singing drummer from Brooklyn’s indie-pop trio Pearl and the Beard. Jocelyn and the band boasted an extensive touring history across the US, UK, + Canada, sharing the stage with such noteworthy artists as Ani DiFranco, Lucius, Neko Case, Bastille, Iron & Wine, and more. She released her debut solo album PUSH on Righteous Babe Records in early 2021, which American Songwriter calls “unique and infectious.” PUSH was arranged entirely for string quartet and includes compositions from an all-star team of composers including Franz Nicolay (The Hold Steady), Adam Schatz (Sylvan Esso), and Emily Hope Price (Pearl and the Beard, Kishi Bashi). The PUSH legacy continues with remixes by Hit & Hope (featuring Chris “Woody” Wood of Bastille), Daron. and Charlie Hunter, Jenny Owen Youngs and many others. Jocelyn’s first solo EP “Unlovely” features a song co-written by Ani DiFranco. Her and her band’s music has been commissioned and synced for film, commercials, and television, including syncs in Hannah Gadsby’s Netflix show Douglas, and the film Hello, My Name is Doris directed by Michael Showalter, starring Sally Field. She has also written for theater in projects funded by the Jim Henson Foundation and appearing at the Park Avenue Armory. At her core, Mackenzie’s extra-sensory skills inform her creative expressions, integrating media and meaning to create work that is both sensual and personal.