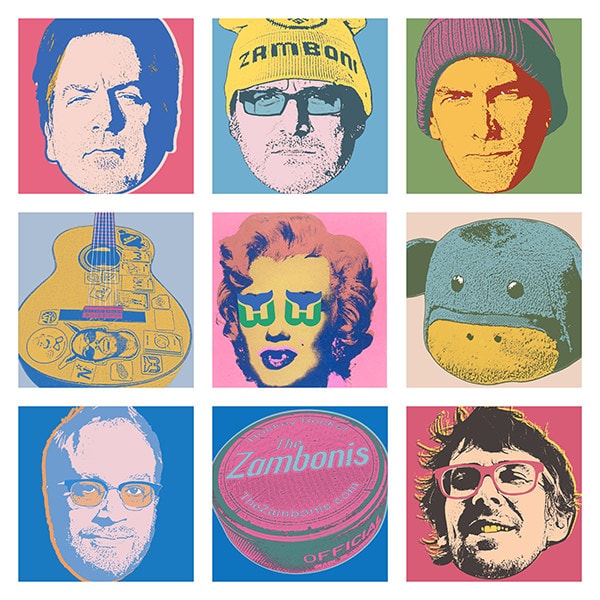 The world’s greatest (and only) all hockey rock band. The Zambonis formed in 1991 when defenseman/guitarist/singer Dave Schneider ask brothers Tarquin and Peter Katis if they want to start a group that played nothing but songs about hockey.
The boys said yes and hockey rock was born.
The only band to claim The Beatles and Wayne Gretzky as two major influences.
What sounds like an absolutely stupid, horrible idea turns out to please music fans, critics and hockey people like it too.
Rave reviews and features in the Ny Times, Sports Illustrated, The New Yorker, ESPN Magazine, LA Times, Magnet Magazine and many more has proven over and over that these guys are not only not a joke band but, are no joke.

Savvy songwriting, musicianship and wit exceeds the one dimension you would expect. Not only can they carve out great songs about hockey, life, love and hockey again but, in 1997 they received a cease and desist from the actual Zamboni® Company. After teams of lawyers battled it out, the two left the lawyers in the office and met in person. The off ice battle, was simply resolved with a hand written letter asking The Company to please not make us change our names to “The Motorized Ice Resurfacing Machines”.

25 years, 9 records, a bunch of jerseys and a whole lot of fun.
Hockey rock is alive and kicking in 2017